Zero Liquid Discharge plants capable of filtering, purifying and recovering wastewater generated by one or more production cycles to then reintroduce it into the same industrial process. 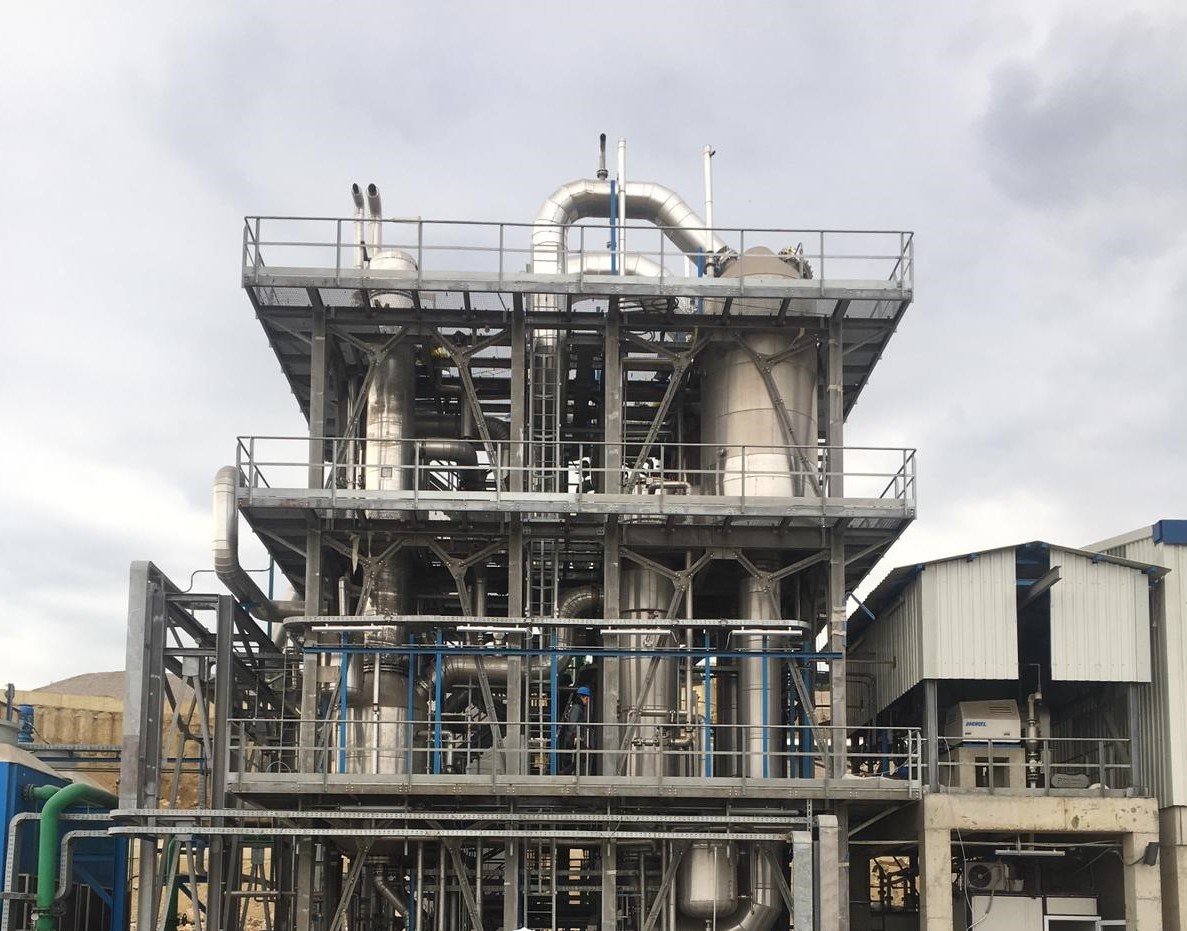 Building a ZLD (Zero Liquid Discharge) unit means designing a wastewater treatment plant capable of purifying and recovering the wastewater of a production system and reintroducing it back in. Therefore ZLD is not a specific technology, but rather a philosophy; this type of treatment is a safe investment as it not only guarantees an important environmentally friendly benefit but also a significant economical payback. The range of systems which Brofind proposes in this field is divided into two categories, depending on the type of pollutants to be eliminated:

Brofind’s long-standing experience in the ecological sector led to the installation of this type of plant in various fields of industry (flexible packaging, chemical, metallurgical), with treatment potential ranging from 1,000 to 70,000 kg/h water. Lastly it is worth mentioning the water treatment units proposed by Brofind at the service of some solvent recovery plants (stripping and filtering of activated carbon), which effectively purify all of the water used and recycle it in the production process.

The evaporation plants are designed to concentrate water solutions containing solid salines, possibly until they crystallize. The resulting products are:

PRE-TREATMENT WITH MEMBRANES If required by the specific application, Brofind can design and install membrane units for the pretreatment of aqueous solutions containing solid salines. Microfiltration, ultrafiltration and reverse osmosis plants can provide a first purification step, also significantly reducing the flow rate of concentrated wastewater to feed the evaporation units. EVAPORATORS AND CRYSTALLIZERS These plants are based on the principle of multiple effect evaporation, in which several evaporators work in series. Each of them produces a distilled stream and a saline solution – the latter progressively more concentrated at each stage. The types of evaporators and crystallizers that are manufactured are described below. The operating principle entails that each effect operates at a pressure lower than the previous one so that the energy necessary for each evaporator can be supplied at a progressively lower temperature, thus directly exploiting the evaporated stream from the previous step. Accordingly, external energy is only required at the first effect (boiler steam) and at the condenser located downstream of the last effect (cooling water), guaranteeing considerable overall energy saving. The most common configuration entails operating with process fluid in parallel flow with the heating fluid. The solution to be concentrated is then fed into the circulation piping of the first effect and transferred from the first to the second effect, from the second to the third, and so on. Whereas if the viscosity of the wastewater to be treated significantly increases as the temperature decreases and the concentration increases, it is possible to operate with the process fluid in countercurrent with respect to the heating fluid. This way the most concentrated solution will be found in the effect operating at a higher temperature (and pressure). The solution being concentrated is then fed into the circulation pipe of the last effect while the concentrated solution is transferred from the last effect to the previous one, etc. In both configurations, in the jacket of the first effect, it condenses boiler steam which supplies the energy necessary to evaporate the design value. The process evaporated liquid of the first effect is sent to be condensed in the heat exchanger of the second, that generated in the second is sent to the third, etc. The process evaporated liquid exiting the last effect is condensed in a specific condenser, in thermal exchange with cooling water. In steady-state, the circulating fluid maintains the design concentration so that, from the last effect, the product is continuously discharged through density control, by means of a pump which can also treat suspended solids. The potential of the entire system is regulated by controlling the feed of the boiler steam. The condensed boiler steam is collected in a tank for recycling. Similarly the process condensate (essentially demineralised water) is stored in a tank to be sent to some minor internal utilities (demister washing, level flushing) and to the coil limits for reuse in production. The desired degree of vacuum is maintained by a specific liquid ring vacuum pump which extracts and discharges the system’s non-condensable gases. Optimising the plants supplied by Brofind also entails assessing the feasibility and convenience of some energy-saving measures, such as desuperheating the condensing boiler steam of the first effect and preheating the feed with the process condensate and with the boiler condensate. Falling film evaporators: In some applications, the presence of suspended solids is expected in the first effects. In these cases it is therefore possible to use falling film evaporators, which enhance energy efficiency. In these units, the liquid is fed from above and drops into the pipes in the form of film: evaporation does not take place directly on the surface of the pipe, but on the liquid-steam interface of the film, highly turbulent; the liquid and steam are then separated in the collection vessel at the bottom. The pressure drops are reduced and a minimum boiling temperature increase, while there are high thermal exchange coefficients with low temperature differences. Forced circulation evaporators and crystallizers: The effects where the presence of suspended solids is expected are forced circulation crystallizers, designed to operate even in the presence of solid precipitates. These units are based on the principle of transferring heat to the process solution as progressively as possible, so as to maintain long operating cycles and to improve heat exchange. Therefore a high flow rate of the process fluid in circulation is maintained, supplied with calories with a very low temperature excursion, so as to:

Using large diameter pipes also makes it possible to avoid clogging, or high circulation rates reduce fouling and improve the heat exchange coefficients. The heat exchanger is kept under an adequate liquid head to keep it from boiling thus reducing the risk of undesired fouling while evaporation takes place in the evaporator below. A demister is installed at the top of this to limit solution entrainment in the steam, periodically washed with the process condensate. Lastly the particular design of the appliances reduces the formation of foam in the presence of organic compounds. Single effect evaporators: If a relatively low amount of energy is required (e.g. low flow rate to be treated), a single evaporation/crystallization effect can be used in which to realise the entire concentration increase of the supplied solution. In these cases it is also possible to increase energy efficiency by installing a thermo-compressor (ejector) fed with medium pressure boiler steam (motor fluid) in order to recompress part of the process evaporated liquid (intake fluid), to produce the service steam of the unit (delivery fluid). This system significantly reduces boiler steam consumption as well as the cooling water to the condenser. Centrifuge: The suspended crystalline solids obtained in the last evaporation effect can be further concentrated in a specific centrifuge. The mother liquors are recycled directly being fed to the evaporator to obtain salts with an extremely reduced residual moisture. 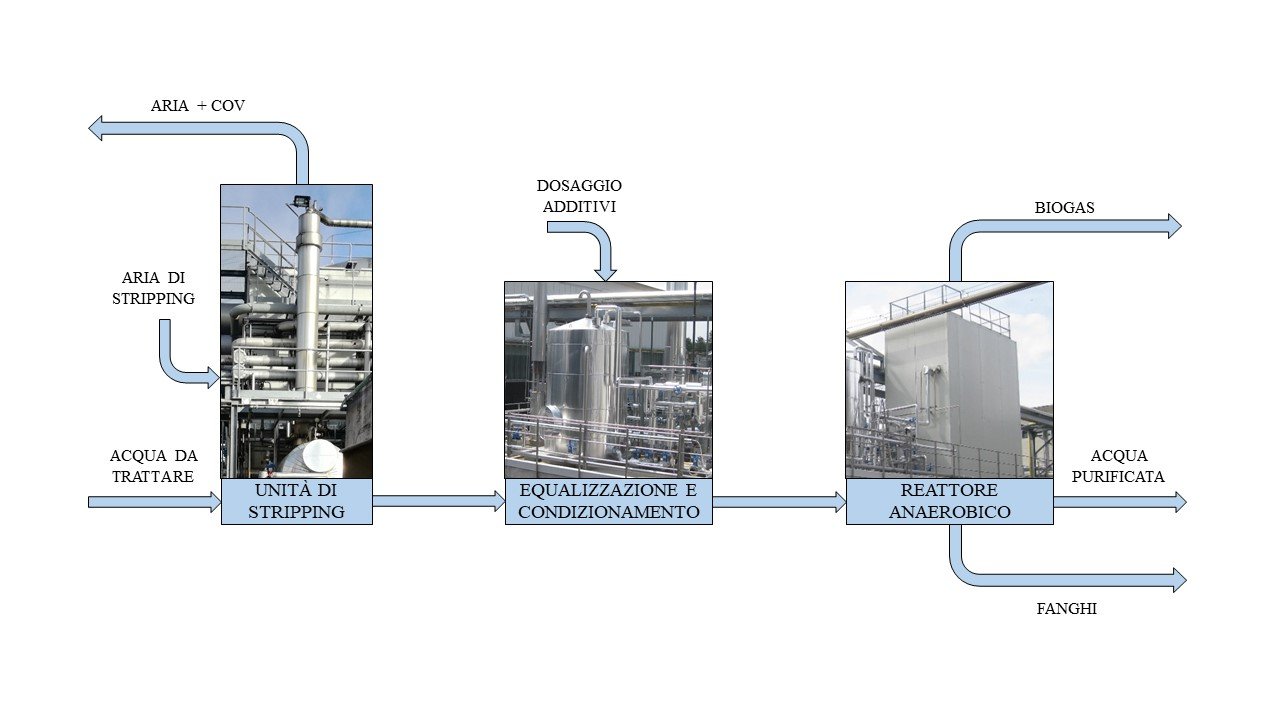 Biological treatment plants are intended to purify wastewaters characterised by high COD (Chemical Oxygen Demand), indicating the degree of pollution from chemical compounds. Depending on the specific demand, plants can be supplied to lower the COD from values up to 15,000-20,000 mg/l – highly polluted industrial waste – to around a few hundred mg/l, thus allowing for less costly waste management or, if possible, to reuse it in other production contexts. The complete system is made up of 3 phases:

Stripping unit Purifying wastewater with air in a stripping unit generally significantly reduces the organic content. This type of unit is especially effective if installed upstream of the biological treatment plants, for example with a very high organic load or in the presence of some bio-toxic compounds for feeding microorganisms. A single stripping column fed with ambient air can remove more volatile compounds (e.g. ethyl acetate) from the aqueous phase. Since the outlet air from the column is solvent laden, this solution is particularly convenient when a gaseous venting treatment system (e.g. RTO plant) is already available in the factory or there is the need for other emissions. Conditioning and anaerobic digestion The water to be treated is generally stored in an equalisation tank, which makes the stream to be sent to the treatment plant homogeneous over time, before being transferred to an intermediate tank (called pre- acidifier). Before being fed to the reactor, the water is brought to suitable conditions for treatment, through the following steps:

This conditioned water is then introduced into the reactor where it is treated through the digestive activity of the biomass therein. Depending on what type of reactor is employed (e.g. UASB), it can operate continuously or discontinuously, possibly with partial recycle of the wastewater from the reactor to the pre-acidifier upstream. The purified water can then be sent to the discharge with significantly reduced COD (variable case-by-case) or transferred to a second treatment section. Biogas treatment The anaerobic digestive activity carried out in the reactor produces a small amount of biogas. Therefore there must always be a flare in the reactor for its combustion guaranteeing normal treatment or anyhow as a safety device. At times this biogas can be valorised as an auxiliary fuel from thermal oxidation systems (e.g. RTO for the treatment of other gaseous emissions). Aerobic digestion When the drain water needs to be extremely pure, it could be necessary to install an aerobic finishing section in a simple open reactor equipped with ambient air blowing system. Here again the type of reactor can be chosen on a case-by-case basis. The purified water, having undergone filtering of the suspended solids and UV disinfection, can thus be reintroduced into production or sent to the final drainage.